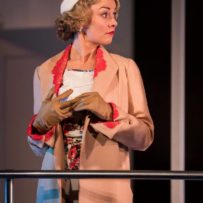 Lorna most recently played the the role of ‘Sybil Chase’ in PRIVATE LIVES by Nöel Coward at the Gate Theatre in Dublin. This production was directed by Patrick Mason.

Other theatre credits include the role of ‘Cecily Cardew’ in THE IMPORTANCE OF BEING EARNEST, also at the Gate Theatre. This production was directed by Patrick Mason and subsequently toured to Charleston, South Carolina where it was performed during the 2016 ‘Spoleto Festival’.

In 2015, Lorna reprised her role as ‘Elizabeth Bennet’ for the Gate Theatre’s production of PRIDE AND PREJUDICE. This production travelled to Hong Kong for a sell-out run at the ‘Hong Kong International Arts Festival’.

Following this, Lorna went on to reprise her role as ‘Niamh’ in RISE Productions award winning play THE GAMES PEOPLE PLAY.